Jack to Join MPG Motorsports, Will Power Kart for 2023 Season

12/9/2022 -
Indianapolis, IN - To kick of the USAC Night of Champions Celebration, Jackson Diehl announced that he plans to join karting team MPG Motorsports and

11/5/2022 -
Sandusky, OH - The "Hanimal" capped off her first full Midwest Thunder season in a competitive class by scoring a top 10 in the series points standing 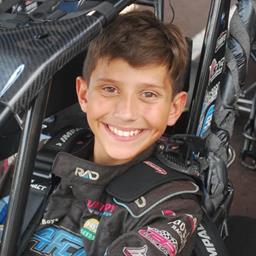 Jackson is 13 years old and has been racing USAC .25 Midgets since he was 7. In his rookie year, Jack won over half of the features in which he raced, and was ultimately awarded the Capitol Quarter Midgets Rookie of the Year. Jackson earned the nickname "The Real Diehl" from USAC announcer Butch Lamb in his second year after sweeping the heat races at the USAC .25 Nationals at Chicagoland Speedway. Jack is currently the reigning Senior Animal and Modified World Formula Midwest Thunder Champion. He finished 2nd in the USAC .25 National Series in Modified World Formula, and 3rd in the nation in Senior Animal. He is also a proud recipient of the 2019 Dave Darland Sportsmanship Award.

Jack is known his smart, hard, and clean driving style. He has a knack for putting his car in a position to win races, whether or not he has the fastest car.

Off the track, this Granger Indiana native is a straight A student who wants to study engineering in college. He runs cross country, and has competed in triathlons. He enjoys playing video games, especially racing games, with friends.